Simply Reliable Software announced this week that it has added a dramatic new feature called “Digital Proposals” in the latest update of its SmartOffice software. The company called Digital Proposals “a game changing feature.”

Simply Reliable, Inc. is one of a small group of companies that offer software solutions to help integrators be more efficient in running their operations. Originally focused on generating proposals, Simply Reliable, like others, has expanded their solution to handle more aspects of running what they call a “trades-based” small business.

Their most popular solution is called the SmartOffice, a cloud-based project management solution “developed for custom integrators, by custom integrators.” In a recent update of their SmartOffice software, the company has added a new feature called, appropriately enough, Digital Proposals. 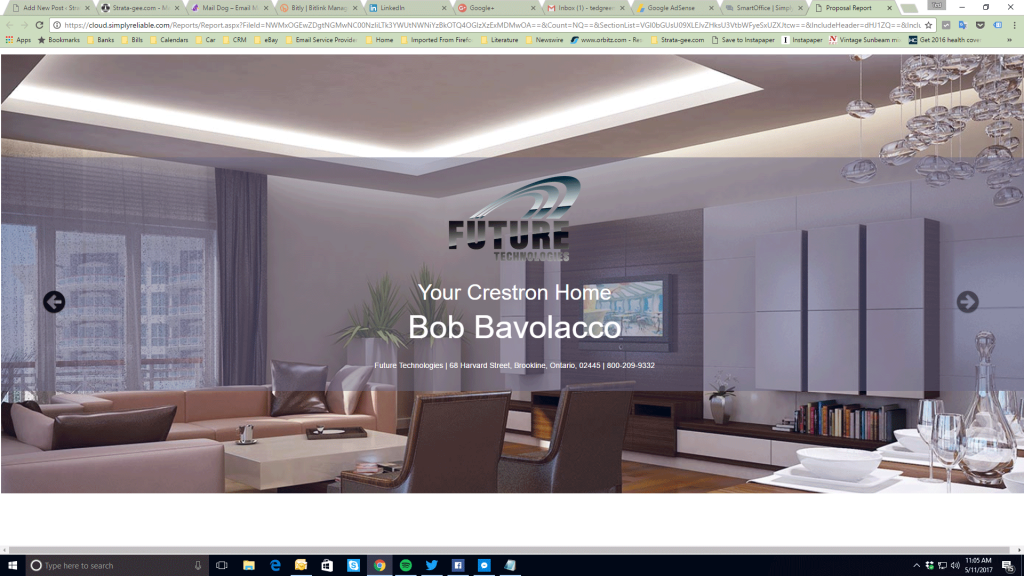 Cover page from a sample of Simply Reliable’s Digital Proposal. Click on the image to expand. Find and click the link in the text below to see the full sample proposal.

More Than Just A Proposal in Digital Form

Much as it sounds, Digital Proposals are your newly created proposal in digital form. Of course, SmartOffice has had a form of digital proposals before, with the ability to generate an Acrobat pdf file of a proposal that was easily emailed to clients for review in the previous software version. But this new cloud-resident version is so much more flexible, according to company President & CEO Tom Coffin.

“This is a much cooler experience – it’s basically a mni-website,” Coffin told us in a telephone interview. “There’s better customization, you can incorporate audio and video into the proposal – basically you can do anything in your proposal that you could do in a full website.”

The solution is designed to generate a proposal quickly and easily, but at the same time, allow the proposal creator flexibility in how much (or how little) detail to include. This extra flexibility allows the integrator to design a proposal that better meets the needs of each individual client.

“It is a whole new way to interact with the prospect,” Coffin said in a prepared statement about the program. “Not only do Digital Proposals provide beautiful graphics and a modern way to view, present, and accept proposals [but] we’ve added an easy way to add personalized videos as part of the proposal presentation.”

Digital Proposal is Free with a Subscription

The new Digital Proposal feature is included free with a SmartOffice subscription. Simply Reliable’s SmartOffice has several editions with subscriptions starting as low as  $40 per month. The company also offers a 30-day free trial period so that integrators can try out the various versions risk-free.